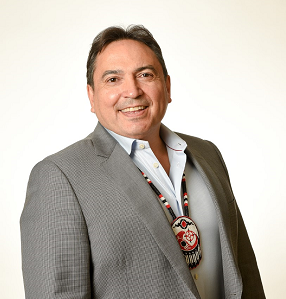 Perry Bellegarde was re-elected for a second term as National Chief of the Assembly of First Nations in 2018. Originally from Little Black Bear First Nation in Treaty 4 Territory, he has spent the past thirty years putting into practice his strong beliefs in the laws and traditions instilled in him by many Chiefs and Elders. Perry has served in several elected leadership positions in First Nations governments. In 2018, the Province of Saskatchewan recognized Perry with the Saskatchewan Order of Merit, one of several recognitions.

National Chief Perry Bellegarde remains committed to building on the momentum created since his election to the Assembly of First Nations in 2014. His national platform and agenda remain top priority, and have directly influenced the federal government’s planning and priorities to date.