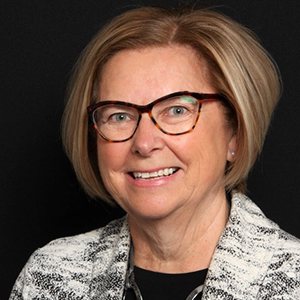 Mary Ann grew up in Canora, Saskatchewan with three sisters, who as youths were immersed in and taught the value of volunteerism. Her involvement in the Ukrainian community has been a lifelong, rewarding journey.

Professionally Mary Ann is a pharmacist (University of Saskatchewan).

A dedicated volunteer and community leader locally, provincially and nationally, she continues to work with UCC Yorkton, and has served on UCC Saskatchewan Provincial Council as its President. Successes during this time included hosting the UCC XXV Triennial Congress in Saskatchewan, new government contracts being awarded to UCC Sask, growth of existing programs, and the expansion of our Hromada Legacy Fund.

Serving as a member of the Saskatchewan Ukraine Relations Advisory Committee (SURAC) has afforded Mary Ann the opportunity to act as part of a team in an advisory capacity to the Government of Saskatchewan. As president of the Troyanda Ukrainian Dance ensemble for over a decade, Mary Ann helped to build the organization into a vibrant, performing group.
An active member of Ukrainian Orthodox community, Mary Ann has held positions on the Ukrainian Women’s Association of Canada both locally and provincially. Other memberships in the Ukrainian community include: the Ukrainian Museum of Canada (her family established an annual student art scholarship in their sister Dianne Ortynsky’s name); the Ukrainian Society of Prosvita (Regina), the Ukrainian Fraternal Society, the St. Petro Mohyla Institute (co-chaired 95th and 100th Anniversary events/celebrations) in Saskatoon, St. Andrew’s College, and is also an ardent supporter of Camp Trident Youth Camp.

Mary Ann has served terms as Senator at the University of Saskatchewan, Canadian Federation of University Women, and was a long-time member of Dance Saskatchewan promoting Ukrainian art forms. She has helped to promote and create fundraising opportunities for the preservation of pharmacy artifacts by serving on the Saskatchewan Pharmacy Museum Society.

Locally, Mary Ann continues to be an active board member of the Health Foundation of East Central Saskatchewan.

Mary Ann and her husband Dr. Bernie continue to support Ukrainian initiatives by way of volunteering and donating to their member organizations and charities. They raised their four children Dr. Greg (Alexa), Dr. Devan (Jen), Dr. Taisa (Josh) and Lucia (Lucas) in the vibrant Ukrainian community of Yorkton and are proud to acknowledge their family’s involvement in the communities in which they live.