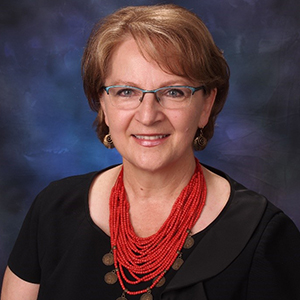 Nadia, grandchild of first wave immigrants to Canada from Western Ukraine, grew up on a farm near Prud’homme, Saskatchewan and attended the University of Saskatchewan. While at university, she joined a Ukrainian dance ensemble and youth choir, and was energized by her experiences travelling and performing with other young people who shared her language and culture. These experiences influenced Nadia’s decision to become a Ukrainian language teacher. She wanted to inspire her students to live out their Ukrainian heritage and to enjoy having a dual identity in Canada.

In fall of 1979, Nadia became the first teacher in the Ukrainian-English bilingual program in Saskatoon. With no provincial curriculum to follow, Nadia created the program ‘on-site’ for the first two years. She was approached by the Ministry of Education to write bilingual curricula, while continuing to teach in the program. After K-12 curriculum development was complete, Nadia held several administrative positions with Saskatoon Catholic Schools, including Byzantine Rite religion consultant, public relations coordinator, and assistant to the Director of Education. In 2000, Nadia returned to the Ministry of Education to become a provincial language consultant, followed by Senior Program Manager for English as an Additional Language (EAL), a position she held until retirement from the ministry in 2016. In recognition of her leadership in EAL education in Saskatchewan, Nadia was nominated for the Premier’s Award of Excellence.

During her years with the ministry, Nadia was the principal author or co-developer of over twenty documents for Ukrainian bilingual education, high school language education, immigration, and EAL Education in Saskatchewan. She has been a frequent presenter at language workshops, seminars, and conferences, and has been a course instructor for teachers in Ukraine.

Currently, Nadia works with the College of Education, University of Saskatchewan, as a course developer and instructor for teachers pursuing a specialization in EAL education. She is also an associate member of the Prairie Centre for the Study of Ukrainian Heritage (PCUH) at St. Thomas More College, where she is leading a Ukrainian Language Assessment Project that is being shared with language educators in Canada and Ukraine.

Nadia’s past volunteer roles include board membership on various committees, including: UCC Saskatchewan, the Metropolitan Sheptytsky Society of Saskatchewan, Saskatoon Friends of the Shevchenko Foundation, Saskatchewan Teachers of Ukrainian, and the Saskatchewan-Ukraine Relations Government Advisory Committee. Nadia completed two terms as the UCC Saskatchewan representative to the U of S Senate and two deployments as a Canadian election observer in Ukraine. Most recently, Nadia has been actively involved with the UCC Saskatchewan Holodomor Awareness and Education Committee as a writer, resource developer, and presenter on the topic of Holodomor.