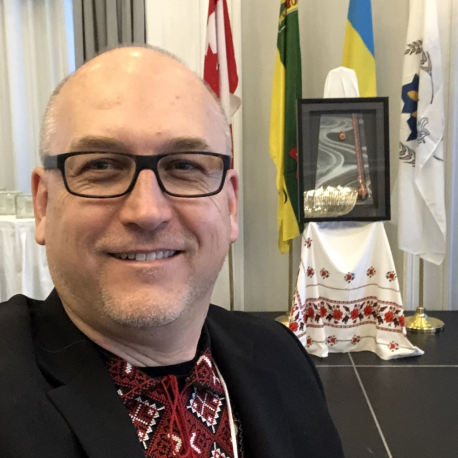 Born and raised in Saskatoon, Saskatchewan, Danylo Puderak’s life on the Ukrainian community stage began as a teenaged Ukrainian dancer who would eventually retire from the Yevshan Ukrainian Folk Ballet Ensemble. His love of music and song also led him to join Saskatoon’s Vesna Ukrainian Choir.

Danylo’s community activist endeavours began when he was recruited into the University of Saskatchewan Ukrainian Students Club. This led to his engagement at the National SUSK level. Locally, he has volunteered with the Ukrainian Canadian Social Services Saskatchewan Branch Executive; the Vesna Festival Board of Directors; and was one of the initiators of Saskatoon’s annual outdoor celebration of Ukraine’s Independence that is now known as Ukrainian Day in the Park.

Danylo has been the Executive Director of the Ukrainian Canadian Congress of Saskatchewan for the past 16 years. During this time, the organization has grown from 3 staff members to 8, expanded its community service reach to also include newcomer settlement services and has increased its budget 2.5 times while, at the same time, cultivating a Reserve Fund of over $230,000.

An alumnus of the University of Saskatchewan, Danylo holds a Bachelor of Arts degree in History and Ukrainian Studies as well as a Certificate to Teach English as a Second Language. Danylo has both studied and worked in Ukraine and he was privileged to serve as a Ukrainian World Congress International Election Observer for both the final round of the 2004 Ukraine Presidential Elections and the May 2014 Presidential Election.