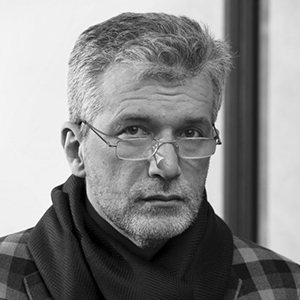 Andriy Kulykov (born in 1957) began his way to journalism in 1979 as a Soviet propagandist in “The News From Ukraine” weekly published in Kyiv by the Association for Cultural Relations with Ukrainians Abroad. He went on to become a journalist in the second half of 1980s, reforming together with the newspaper that he worked for. In late 1980s he was a member of the Organizing Committee of the Ukrainian Language Society and an active participant in forming the Rukh Movement in Kyiv and across Ukraine. In 1992, he was among the first four journalists from Ukraine recruited by the BBC to launch the BBC Ukrainian Service on radio. He worked for the Service in London in 1992-1995, and then in 2000-2005. In between these two periods, he worked for a number of TV channels in Ukraine. In 2005-2007 he worked in Ukraine for an EU-sponsored journalism education project. From 2007 to 2016 Andriy was the presenter of the Svoboda Slova (Freedom of Speech) political talk show on ICTV television in Ukraine. In 2013, with a band of friends and other journalists, he re-founded Hromadske Radio, an independent talk radio station, a rare example of the third sector of broadcasting in Ukraine. From 2016, he worked for this radio full-time, occasionally doing TV projects, in particular, for Hromadske, a TV channel of the third sector in Ukraine. Andriy is Head of the Board of “Hromadske Radio” NGO which owns the radio station. He also heads the Journalism Ethics Commission, a self-regulatory body of Ukrainian journalists. Andriy Kulykov lectures extensively at Ukrainian universities and is a staff lecturer at the Mariupol State University in Donetsk Region. An expert in international relations and consulting translator of English by education, his hobby is translating English-language rock songs into Ukrainian.