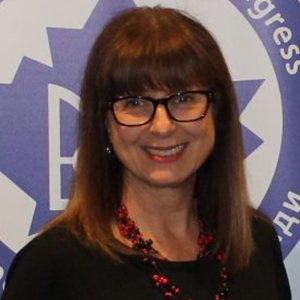 Alexandra Chyczij is a committed leader, activist and volunteer, dedicating her efforts to serving the Ukrainian community in Canada. The UCC coordinates and represents the interests of one of Canada’s largest ethnocultural communities (1.35 million). The UCC brings together under one umbrella all the national, provincial and local Ukrainian organizations and has been instrumental in shaping Canada’s social, economic and political landscape.

Alexandra Chyczij is the Executive Director of the Canadian Corporate Counsel Association (CCCA), the national voice of in-house counsel in Canada. With a membership more than 5000-strong, the CCCA is a section of the Canadian Bar Association, the essential ally and advocate of the legal profession in Canada. Prior to that, Alexandra was CEO and Executive Director of The Advocates’ Society, a national not-for-profit association for trial lawyers, judges and advocates. Previously, Alexandra practiced civil litigation.

Alexandra is an Executive member of the Board of Directors of the Ukrainian Canadian Bar Association, which maintains a national network of lawyers, judges, paralegals and law students of Ukrainian origin in order to create professional opportunities, to mentor law students and young lawyers, to conduct professional development, as well as to assist Ukraine with respect to the development of its legal system.

In 2017, Alexandra co-chaired the Team Invictus Ukraine Gala Event attended by Prime Minister Justin Trudeau (Canada) and President Poroshenko (Ukraine), which raised $100,000 for the Defenders of Ukraine Fund, providing aid to Ukrainian veterans of the war with Russia.

Alexandra is co-chair of the Canada-Ukraine Stakeholder Advisory Committee, a forum for consultation between the Government of Canada (Global Affairs Canada) and the Ukrainian Canadian community (represented by UCC). Alexandra was a member of the delegation of Canada’s Minister of International Development, the Honourable Marie-Claude Bibeau, on her first visit to Ukraine, in 2018. Minister Bibeau was the first G7 Minister to travel to the line of contact of the war with Russia being fought in eastern Ukraine. In 2016, Alexandra was a member of Prime Minister Justin Trudeau’s delegation on the Prime Minister’s visit to Ukraine to witness the signature of the Canada-Ukraine Free Trade Agreement.

Alexandra is a member of the Fundraising Committee for the Konowal Walk at the Hill 70 Memorial, commemorating the bravery of Cpl. Filip Konowal at the Battle of Hill 70 (August 22, 1917) for which he was recognized with the highest medal of the British Empire, the Victoria Cross. He was the only Ukrainian Canadian ever so distinguished.

For many years, Alexandra has worked with the Ukrainian Canadian Congress and the Ukrainian Canadian Civil Liberties Association on legal issues, advocating for matters affecting the administration of justice, rule of law, human and civil rights. She has conducted research and advocated for recognition of the Holodomor (Ukrainian Famine) as a genocide and for recognition of the unjust internment of Ukrainian Canadians and others in Canada’s first national internment operations during WWI. She has prepared submissions to and appeared before Standing Committees of Parliament and the Ontario Legislature on various issues including Citizenship and Immigration (denaturalization and deportation) and Public Safety and Emergency Preparedness (Emergency Preparedness Act).

Alexandra chaired the Triennial Congress of Ukrainian Canadians in 2010, 2013, and 2016, and has been an election observer on Canadian bilateral missions to Ukraine for several elections.

Alexandra was co-counsel with Justice John Sopinka on the International Commission of Inquiry into the 1932-33 Famine in Ukraine, convened by the World Congress of (Free) Ukrainians in 1988, whose report was delivered to the United Nations.